Vatersay and Barra The Hebridean Way starts at Vatersay, the southernmost inhabited place on the Western Isles. It’s a few miles south of the ferry port at Castlebay, so you’ll need to retrace your steps, but it’s worth it – not just for saying you’ve ridden from end to end, but for the delightful narrow causeway that links Vatersay to Barra, with fishing boats moored alongside.

The route loops round the west coast of Barra, giving the first stunning, uninterrupted views of the Atlantic. It’s nominally an A road, but narrower and quieter than many a minor road on the mainland. Keep your eyes peeled for the marine life: oyster-catchers, gannets, seals, even otters and (on the more remote islands) puffins.

The ferry from Barra to Eriskay runs up to five times a day and takes 40 minutes. 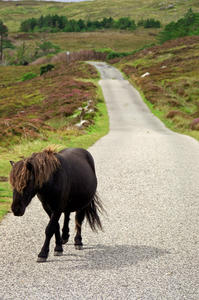 Eriskay and South Uist (19mi) Eriskay is a short prelude to the long, flat ride across the moors of South Uist. A string of farmsteads are dotted along the otherwise feature-free road, though the cycle route adds a couple of loops to maintain interest. Generally you’re too far from the coast here to appreciate the Atlantic, making it the sort of quiet, relaxing ride best enjoyed on a sunny, wind-free day. 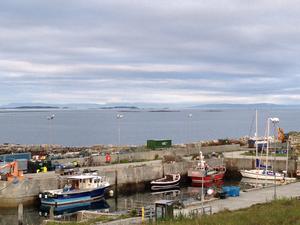 Benbecula and North Uist (51mi) Things perk up a bit when you cross the causeways connecting the little island of Benbecula to North Uist. There are fine views of the coast once more as the route follows the western shore – though its back-and-forth nature does put you at the mercy of the winds. There are no hills to shelter behind, which is either a blessing or a curse! The RSPB reserve at Balranald, on a brief diversion from the main road, is worth an hour’s stop; you can also camp here.

Another small isle, Berneray, is the jumping-off point for the ferry to Harris. The ferry port is at the southern end of Berneray, but assuming you have a while to wait for the boat, it’s worth riding the three miles of the island. There’s a welcoming shop and café, and even a bike repair shop. 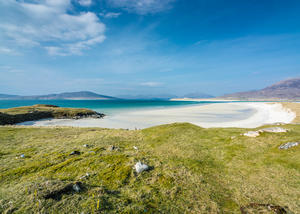 Harris (106mi) Harris is one of the jewels of the Western Isles, not just for the sea views but for the magnificent Luskentyre Sands – one of the finest beaches in Scotland if not the whole of Britain. The light hitting the shallow waters is simply magical and will inevitably have you snapping away with your camera as soon as you round the bend. Take the little diversion up the minor road to Luskentyre itself for the full experience.

This is also where you’ll encounter the first real climb of the trip, rounding the corner from Luskentyre towards Lewis. If you have time to spare, Harris has equally attractive roads on its east coast which make for a delightful loop ride.

You’re heading into the most traditional area of the Hebrides now, and you may find that Sunday services are very limited. If you can, try to arrive here on a weekday. 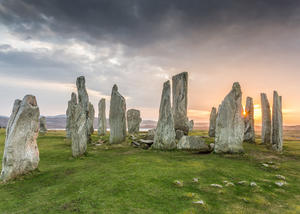 Lewis (127mi) Harris and Lewis are nominally separate islands, but there’s no ferry or causeway to divide them – just hills. Soon after the little port of Tarbert comes Ardhasaig and the start of the Hebridean Way’s one real climb, a tough haul over 200m of mountain.

There’s nothing as difficult afterwards, but nonetheless Lewis is a hillier island than anything we’ve seen so far. That’s not a bad thing: it makes for variety in the scenery, perhaps a little closer to what you’d expect from Scotland and less moonscapey than the Uists, though it’s less classically pretty than Harris or Barra. Though the climbs might seem short, the constantly undulating terrain is harder work than the miles up to now, so plan your schedule accordingly.

The Callanish Standing Stones are the Western Isles’ Stonehenge, just older (and more windswept). They’re an essential stop on the route. The island capital of Stornoway isn’t on the Hebridean Way, though you may end up returning there for a ferry back to the mainland.

Eventually, after 320 miles, the route runs out of land – literally – at the Butt of Lewis. Beyond the lighthouse, there is simply sea as far as the eye can see. It’s a memorable experience, quite unlike any other cycle route in the British Isles.