Carlisle Arriving at Carlisle, Hadrian’s Cycleway eases you into your coast-to-coast challenge. It’s traffic free for the first mile, with the route well signposted from the station; it then settles down onto little roads along the Eden valley. There’s one hill just before Brampton, a friendly market town with a good range of cafés. 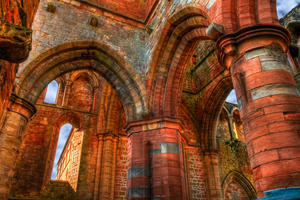 Lanercost (15mi) The priory, church and cycle-friendly café at Lanercost are worth a stop before the route climbs up to our first glimpse of Hadrian’s Wall. (There’s a short one-way split in the route, but it’s clearly signed.) The route runs alongside the wall for the next three miles, with impressive views over the Irthing valley to the south. 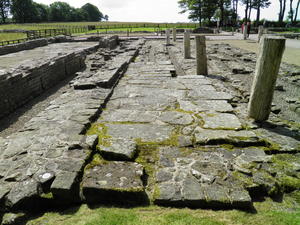 A new traffic-free path runs beside the railway line after Gilsland, after which comes the steepest hill on the whole route. A gravel path has been built alongside, but to be honest we found the tarmac surface on the road more comfortable. The corollary is the two-mile descent into Haltwhistle, which is pure fun.

Haltwhistle (26mi) Haltwhistle is an old-fashioned town with a particularly good line in butchers’ shops. The Tourist Information Centre is now housed in the library, but is closed over the winter.

The Pennine Cycleway meets Hadrian’s Cycleway at Haltwhistle, and the two routes share a common path for the next seven miles. At first it’s fairly uneventful, but at Bardon Mill it kicks uphill, climbing back towards Hadrian’s Wall. 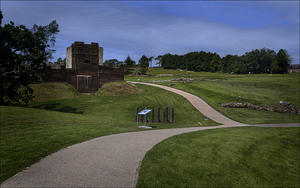 Vindolanda (35mi) The two cycleways split at a lonely T-junction known as Smiths Shield. Note that there’s a pub, youth hostel and the Northumberland National Park visitor centre at Once/Twice Brewed, half a mile further along the Pennine Cycleway.

Vindolanda is the real deal, the most impressive site along Hadrian’s Wall by quite some margin. So much wilder than Birdoswald, this remote outpost of the Roman Empire has been extensively excavated. A small number of new-build wooden structures help you imagine what life must have been like for the Gauls who received a (no doubt unwelcome) posting to this windswept fort. A vast number of relics – coins, leather, and the famous tablets – are housed in the newly renovated museum.

The road is roughly surfaced past Vindolanda, preventing motorists from using it as a scenic cut-through. Half a mile of climbing later, you reach the highest point of Hadrian’s Cycleway.

It really is all downhill from here. Six exhilarating miles of descending on a largely straight road take you to the banks of the River Tyne, which the route will follow closely all the way to the North Sea. A path beside the railway provides a safe approach to Hexham. 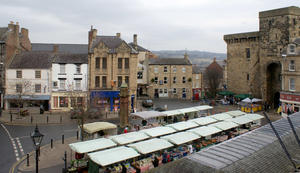 Hexham (48mi) Hexham is perhaps the finest town on the route. Its magnificent abbey dominates the town centre, though the most impressive feature is buried below – the Saxon crypt. St Mary’s Chare is a particularly appealing street with cafés and a handy bike shop. Leaving Hexham requires crossing the river on a busy main road bridge.

Corbridge (52mi) It’s not far to Corbridge, a smaller, attractive town, uniform in its stone buildings and slate roofs. Then comes one of the delights of Hadrian’s Cycleway – the gentle approach to urban Tyneside. From Prudhoe to Tynemouth, the route is almost entirely traffic-free, following the north bank of the River Tyne. Motorists have to contend with roundabouts and retail parks, ring roads and red lights. The cycle route glides serenely into town, sometimes green, sometimes built-up, but always interesting. First comes seven miles of quiet lanes from Corbridge to Ovingham.

Ovingham (60mi) Then the route briefly crosses the Tyne on a rickety road bridge, to join the Wylam Waggonway – a tramroad dating from the 1740s, well before the railway age. This has become a justly popular route, and is usually busy with cyclists. You’ll see a couple of boats on the river here, too. In fact, cars are the one mode of transport which are conspicuous by their absence – apart from a brief tangle with the roads at the derelict Whitehouse Enterprise Park. 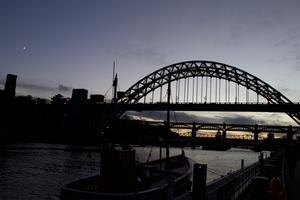 Newcastle (72mi) Newcastle’s riverside panorama is famous the world over, with seven bridges in the space of a mile. The newest, the Gateshead Millennium Bridge, is reserved for cyclists and pedestrians: you could choose to cross here and follow the southern bank to South Shields for an alternative finish. Staying on the north bank leads you to the Hub, a new riverside cycle centre with café, workshop and a programme of events.

The final miles of Hadrian’s Cycleway see it climb above the river onto a railway path – watch out for glass. There are dramatic views back down to the river and the site of the old Swan Hunter shipyard. 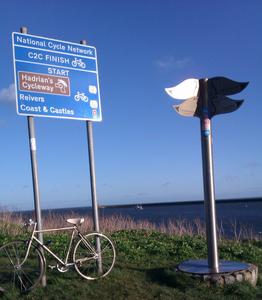 Tynemouth (83mi) Tynemouth marks the end of Hadrian’s Cycleway, but the start of several more adventures – Coast & Castles and the notoriously challenging Reivers route among them. You can celebrate your achievement in local style with fish, chips and a pint, or return to Newcastle to paint the town red. Bikes are now allowed on the Tyne & Wear Metro as long as you get off before the city centre stations, or you could take the Shields Ferry across to the south bank, and return along NCN route 14 for a change.