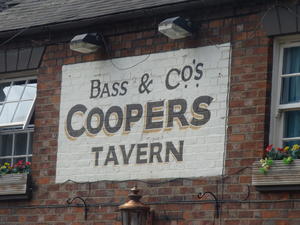 Burton-on-Trent The route starts by the canal in Burton-on-Trent, Britain’s capital of beer. The Coors and Marstons breweries dominate the town, and even if the street-corner pubs have thinned out over recent decades, you’re still unlikely to go thirsty. If you do want to fortify yourself with a pint of Burton ale, our recommendation is the Coopers Tavern on Cross Street, a tiny time capsule of a pub which once served as the Bass brewery tap.

Beer aside, the route through Burton isn’t great, to be honest, and you might want to improvise a diversion through the pedestrianised town centre. The Ferry Bridge gives pleasant views over across the Trent washlands, after which you climb up from the valley on residential streets.

From here to Swadlincote the route is a bit of an embarrassment, frankly, dumping you on a busy road before giving out completely. It’s fairly unbelievable that in 2020 there’s no decent cycle route between two towns so close together, but there you go. We’d suggest just gritting your teeth and making your way to ‘Swad’ the quickest way possible. 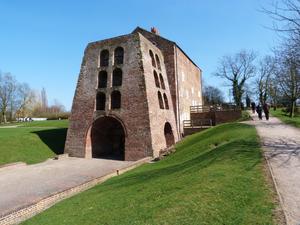 The National Forest (9mi) The National Forest is an ambitious plan to ‘green’ this former coal-mining area. Though it’s planned to stretch across much of east Staffordshire, southern Derbyshire and western Leicestershire, the heart of it is this lovely stretch around Moira and Measham. The route follows an old railway trackbed for seven very enjoyable miles. There’s a little loop out to the Conkers visitor centre and a restored stretch of the Ashby Canal, which is worth taking both for scenic variety and to see the restored 19th century canalside blast furnace at Moira.

After the village of Measham (useful for pubs and shops), the route settles into a routine of quiet, winding country lanes. Even in this mining area, little villages such as Newton Burgoland and Odstone look like they were never touched by the Industrial Revolution. The ride over Thornton Reservoir’s dam is a highlight, after which the route takes to well-kept rural paths for a couple of miles until crossing the M1 and entering suburban Leicester. 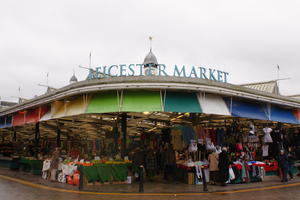 Leicester (34mi) A candidate for England’s most under-appreciated city? Leicester is a fascinating place – historically, culturally and architecturally. You could happily lose yourself for a weekend browsing its independent shops, its colossal market, its Roman and medieval buildings. (And that’s even before we get onto the small matter of the king in the car park.) It’s also very pro-cycling for a Midland city, with numerous safe, segregated routes created in the last few years. (Are you listening, Burton?)

NCN 63 approaches the city centre along the route of the old Leicester & Swannington Railway, one of Britain’s first – see, we told you it was full of history. It then follows the River Soar before skirting the city centre to the south. Do lock your bike up and go for an explore, even if just for an hour.

The exit to the east is pleasantly leafy, crossing Victoria Park before the amiable suburb of Evington signals a return to the countryside.

High Leicestershire (44mi) The sparsely populated countryside between Leicester, Melton Mowbray, Market Harborough and Oakham is known as ‘High Leicestershire’ and is, without doubt, the most beguiling part of this route. It’s a maze of twisty-turny lanes, endlessly rolling hills, tiny villages and isolated farmhouses. Without a map you could get thoroughly, and very pleasantly, lost.

Fortunately you do have a map, and little blue signposts to help you find the way. NCN 64 crosses here on its north-south route between Melton and Harborough. At Tugby, where the route crosses the busy A47, make sure to stop at Café Ventoux – a terrific cycling cafe that underlines just how good the riding is in this part of the world. 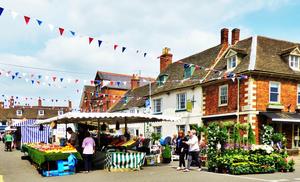 Oakham (60mi) Oakham is the capital of Rutland, Britain’s smallest county – revived in 1997 after being relegated to a district of Leicestershire for 25 years. If you were to sketch a pretty English market town, it would look a lot like this, with its tea-rooms and pubs, its Norman great hall (optimistically called ‘Oakham Castle’), its spired church and its market cross. The NCN route goes round the south of the town centre and was set out before Oakham got a bypass. Now that the High Street is much less heavily trafficed, we’d suggest you just ride straight through the town instead.

Rutland’s greatest tourist draw is Rutland Water, a 1970s project to submerge four square miles of Britain’s smallest county to create its biggest reservoir. You can cycle round the whole shoreline, but our route just follows it for three miles from Oakham to Barnsdale – the latter once well-known as the base of Geoff Hamilton from Gardeners’ World. Then we’re off on country lanes again, following a really lovely quiet road from Exton towards the Lincolnshire border. 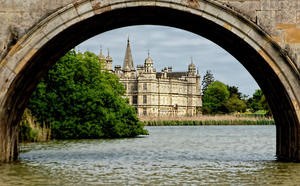 Stamford (73mi) Stamford is ridiculously picturesque, almost like an escapee from the Cotswolds that got as far as the banks of the River Welland before sitting down to rest. NCN 63 crosses the Welland meadows to the south of the town, and once again, we’d suggest locking up your bike for an hour and exploring the historic town centre of High Street and Broad Street. The BBC filmed its adaptation of the Victorian novel Middlemarch here, which tells you something about how well preserved the 17th and 18th century architecture are.

Continuing east, the route skirts the grand Burghley House estate on its way to the village of Barnack, where the pretty ‘hills and holes’ nature reserve looks like a miniature recreation of Tolkien’s Shire. And those are the biggest hills you’ll see for the rest of the route, because this is the start of the Fens – the elevation dipping from 40m above sea level here to a drainage-challenging 0m on the other side of Peterborough. 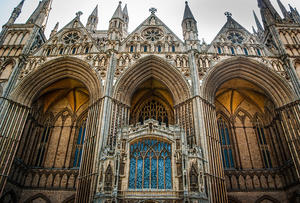 Peterborough (89mi) There’s 15 miles of traffic-free riding across Peterborough, following the River Nene and the preserved Nene Valley steam railway. The sprawling ‘New Town’ of Peterborough isn’t natural cycle touring territory, but the cycle route sees the best of it. Peterborough Cathedral, the main attraction, is a short walk from the route: we’d suggest locking your bike up at the racks by the Lido and then walking north.

The marshy Fens were reclaimed in the 17th century by the Dutch engineer Cornelius Vermuyden, who rerouted rivers and created new channels across a vast expanse between Peterborough, Ely, Wisbech and Cambridge. It’s no exaggeration to say that you wouldn’t be able to cycle the last 40 miles of the route without his works. This Fenland tour begins with a ride along the banks of the improved River Nene before heading into Whittlesey: the ‘ey’ suffix is the same as nearby Ramsey and Ely, and means simply ‘island’ in this once submerged area. Whittlesey could once almost rival our starting point of Burton for sheer number of pubs; there were reputedly so many that, with all the traditional names taken, landlords were forced to call their pubs the ‘Letter A’, ‘Letter B’ and ‘Letter C’. (The B still survives and is rather good.)

March (107mi) March is a railway town, once a busy junction and marshalling yard, now just a stop on the Peterborough–Ely line. It has little to detain the visitor and, once again, the route chooses to skirt the edge rather than visiting the town centre.

The Fenland roads couldn’t be more different from Leicestershire’s lanes: pancake-flat, and straight for miles on end before encountering a 90° bend and haring off in another direction. From March to Wisbech is the best of them, a lane (or ‘drove’) so narrow and quiet it might as well be a purpose-built cycleway. There’s a reason we’ve chosen to describe this route from east to west – the headwinds in the Fens can be brutal. 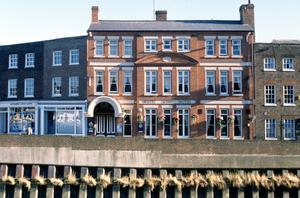 Wisbech (118mi) Wisbech was an important port for centuries and still sees some sea-going freight today, including regular sailings to the Baltics. The riverside is quite the most interesting part of the town, and makes a memorable end to the route.

Here you can join NCN 1, the North Sea Cycle Route, perhaps to ride on to Kings Lynn (with its direct trains to London) 20 miles to the northeast.