Ilfracombe Ilfracombe’s attractive harbour is a suitably maritime location to start this coast-to-coast ride. Although getting here requires an out-and-back trip from the railway station at Barnstaple (now that the Bike Bus has stopped running), it’s worth the effort to reach this colourful town, a down-to-earth hold-out against the march of the chain store.

Woolacombe (4mi) The ultimate ambition is for the railway path to extend all the way between Ilfracombe and Barnstaple, but for now, you’ll have to detour onto quiet lanes after five miles of well-surfaced, level path. One option drops down to the coast at Woolacombe: the climb back up to the main route at Georgeham is tough, but in sunny weather it’s worth it for a burst of sea air.

Braunton (10mi) The railway path resumes at Braunton, for an easy five-mile ride along the estuary to Barnstaple. Look out for the Tarka Inn, a bizarre castellated manor house turned into a waterside pub. Henry Williamson lived in Georgeham, and Tarka the Otter was set along the rivers Taw and Torridge. 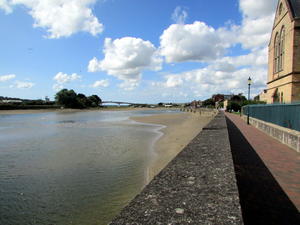 Barnstaple (15mi) This is the Tarka Trail, one of Britain’s best-loved railway paths. Completely level for miles on end, it’s justly popular with Devon C2Cers and novice cyclists alike.

From Barnstaple station, you and your bike gently cruise the Taw estuary – there’s no better word for it. Keep an eye out for wildfowl, perhaps stop for a coffee by the bike shop at Fremington Quay, and dodge the day-trippers at Instow. 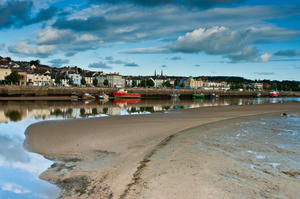 Bideford (26mi) Arriving at Bideford, you can choose from the railway station café or the bike-friendly pub down a set of steps. The route takes on a more inland feel here, forsaking the coast until Plymouth. But the gradient is still gentle as the path criss-crosses the River Torridge on restored viaducts.

East Yarde (36mi) The crowds thin out after the bike hire centre and pub at Great Torrington. Our favourite, though, is the café and bunkhouse at East Yarde, a delightful, decidedly organic encampment with local ale and cider as well as coffee.

Petrockstow (39mi) The central section of the Devon Coast-to-Coast mostly follows quiet country lanes. This is Devon, so that means hills; but also unspoilt villages and welcoming pubs. It’s the ideal counterpoint to the railway paths at either end.

The route leaves the old railway just before Petrockstow. (Though the railway path continues a little further, it’s a dead end for now, dumping you on the busy A386.) NCN 27 climbs on narrow, hedge-lined lanes towards Sheepwash, a tiny village with cycle-friendly pub and church clustered around the village square. NCN 3 leaves us here for Bude and ultimately Land’s End.

Hatherleigh (50mi) Should you choose to overnight here, the Tally Ho pub here offers great beer and filling food. It’s a steep climb out of the village, but worth it for the views from the top.

Okehampton (58mi) In fact, the hardest climb on the whole route is within Okehampton itself. The town is in a valley; the railway… isn’t. And, needless to say, we’re heading for a path beside the railway. Okehampton station is a beautifully preserved curio. For many years it was the headquarters of the Dartmoor Railway heritage line, but in 2021, mainline passenger trains returned, and it’s now the terminus of a frequent passenger service from Exeter. Take half an hour to look around and maybe enjoy a coffee. (There’s a youth hostel here, too.) 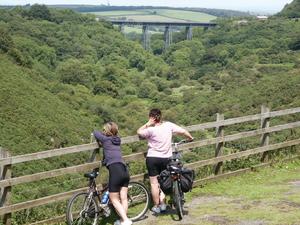 Meldon Viaduct (61mi) The cycleway follows the railway for a while, but claims the trackbed for its own at Meldon, just in time for the magnificent Meldon Viaduct – the finest structure on the whole route. At the summit of the route, this metal beast was too good to lose, and the Devon C2C has given it a whole new lease of life. Don’t just speed over, but walk down to the viewing platform to appreciate this feat of engineering.

As the route skirts Dartmoor, the scenery is the finest of the whole route. Building a railway up here was quite some achievement.

Lydford (67mi) A recent, very welcome improvement has seen the railway path continue to Lydford – where you can take a breather at the Castle Inn. Signage around here is a little confusing, and there are several options: we suggest you keep right at the valley dip when an off-road route heads left, and follow the lanes through North Brentor even if the first signs say 274, not 27. Eventually, after Mary Tavy, you’ll join a new cyclepath that takes you towards Wallabrook Viaduct and the outskirts of Tavistock.

Tavistock (78mi) There are two routes in Tavistock: the main NCN 27 through the town centre, and NCN 270 over the railway viaduct. If you’re not planning to stop, the latter is easier with good views.

The route briefly winds through housing estates before diving onto a railway path, which it will follow almost all the way to Plymouth. And what a railway path. It’s all tunnels and viaducts – and of the latter, the most striking is the Gem Bridge. Opened in 2013, this £2m viaduct for cyclists and walkers replaces a demolished railway structure. It saves an awkward hill scramble and has become a magnet for local families on bikes. Devon County Council and Sustrans, we salute you. 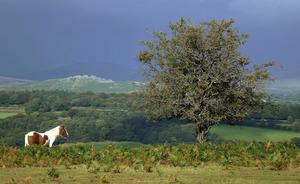 Yelverton (85mi) There’s a steep climb up to the summit at Yelverton, while a former tramway provides the roughest surface of the route so far. Don’t lose heart; these are brief interludes, if hard.

When the track ends on the moor above Clearbrook, however, we’d strongly recommend you continue straight on rather than turning left along the signposted route. The official NCN 27 here is rocky and uncyclable. Straight on, and you’ll descend to the railway path on a steep lane.

Plym Valley (88mi) From here, it’s level and pretty all the way – and you might be lucky enough to see peregrine falcons nesting in the cliffs above the route. In time, another preserved railway joins the cyclepath, with a motley assortment of locomotives locked behind security fencing. Keep an eye out for seabirds on the Plym estuary as you cycle along the wooded path.

Plymouth (99mi) The official end of the Devon Coast-to-Coast is near the ferry terminal, but we’d suggest you call it a day at Plymouth’s regenerated harbour area with its pubs and restaurants. Raise a glass to Sir Francis Drake, Plymouth’s most famous son – and to your own achievement!