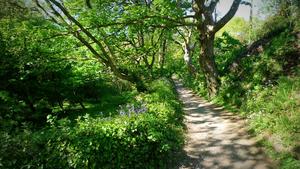 Portreath Whitewashed cottages overlook the colourful fishing boats at Portreath. Fishing isn’t big business here any more, but surfing is – not least the notorious ‘Vortex’ by the harbour wall. It’s stunning to watch if you get the chance, ideally from the safety of the shore with a pasty from the Portreath Bakery in your hand.

The cycle route begins on a little village lane before peeling off onto the first of the mineral railway tracks – wooded and fairly narrow, but well surfaced. Watch out for the occasional lumps of granite which remain from the old railway construction.

Cambrose (2mi) At Cambrose the path follows alongside a road for a while, and you might find it more comfortable to ride on the main carriageway up the gentle incline. There’s a bike hire centre here plus the Elm Farm Café.

Scorrier (4mi) A tiny lane leads onto perhaps the best views of the inland route, looking down over the undulating countryside. The passage over the notorious A30 road is safe and easy, but requires a bit of attention to find your way without getting lost. There are two pubs at Scorrier if you need refreshment after your arduous (ahem) five-mile climb – and yes, this is the top of the route.

Twelveheads (7mi) The trail descends through the lovely Poldice Valley into a grassy scrubland once worked as quarries and mines. The old engine-houses and other paraphernalia of mining are all around, and you’ll see a few metal mesh cones which are used to seal off the mine shafts. It’s all cyclable and walkable now, and you’ll see that NCN 3 shares your route as part of its long trek from Bristol to Land’s End. There’s another bike hire centre and café here, making this the busiest section of the whole route. 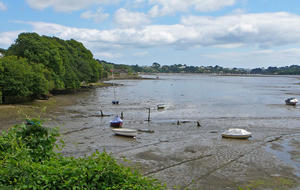 Devoran (11mi) The impressive Carnon Viaduct takes the Falmouth branchline high above the trail, opened in 1933 to replace an older timber structure. From here it’s just a mile and a half to the terminus at the pretty estuary village of Devoran, perhaps more river than coastal but nonetheless an important mineral port in the 19th century.

Strictly speaking you can’t cycle all the way to the little headland, but it’s worth pushing your bike to take in the view. The Old Quay Inn does a very nice line in sandwiches and beer-battered fish and chips.

If you’re returning to Perranwell station, retrace your steps until the trail begins, then take a left turn when the first road crosses it: continue up the hill until you reach the station.