Newcastle The famous bridges of Newcastle are a spectacular start to the ride. The newest, the ‘winking eye’, is reserved for cyclists and pedestrians, and brings another National Cycle Network route to meet us. We stay on the north bank, climbing to a high railway path (watch for broken glass) with excellent views over to the disused shipyards. 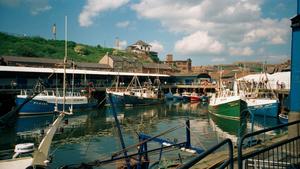 North Shields (10mi) Approaching North Shields, you’ll see a burst of North Sea Cycle Route signs, welcoming continental cyclists who’ve arrived on the ferry to Tynemouth. North Shields itself has a lively street of restaurants, fishmongers and cafés – a good place to stop for lunch. Maritime-themed NCN sculptures mark the end of the C2C and Reivers routes, but we continue north past the Priory and to old-fashioned Whitley Bay with its marvellous seaside ice-cream café.

Blyth (20mi) As Tyneside recedes, the route switches between roadside cycleways, green paths and quiet roads for the five-mile run to Blyth. This town was until recently the low point of the Coast & Castles, a rambling set of urban cyclepaths touring featureless estates. The new coastal route is greatly improved, even if still a little indirect.

Ashington (31mi) Setting off through East Sleekburn and Cambois, the route has a wild, post-industrial charm, even though rural Northumbria seems distant still. The A189 cyclepath and the Lynemouth aluminium works may not be dream holiday material, but persevere: good tmes are just around the corner.

For this is the end of the prologue. This is where we leave the Newcastle overspill and settle down for 60 miles of coastal cycle cruising. The coast road is gloriously quiet, offering intermittent views through the dunes to the North Sea. An unsurfaced track at Druridge keeps the cars away – but don’t get lost in the confusing car park at the north end, by Ladyburn Lake.

Amble (45mi) Amble isn’t as picturesque as the harbour villages further north, but it’s a friendly place with shops, takeaways, and a small amount of accommodation. We liked the Wellwood Inn and the Zecco seafood/pizza restaurant. 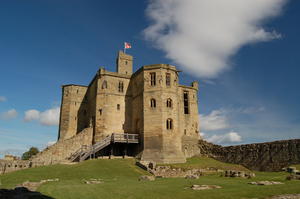 Warkworth (47mi) And then, the first castle of the route – and to some eyes, the finest. Warkworth Castle’s keep is superbly preserved; it doesn’t take much imagination to transport yourself back to the 14th century, when it withstood two sieges by the Scots forces. You can rest your bikes under the portcullis!

An exemplary roadside path takes you to the edge of lovely Alnmouth. Do make the detour into the town, with its three good pubs and the Dandelion Café on the waterfront.

Boulmer (54mi) At tiny Boulmer, four miles north of Alnmouth, the Fishing Boat Inn offers another chance to eat and drink looking out to sea. The main route heads inland briefly, but we’d strongly recommend the off-road option. It’s not too tough, with just one short section where you need to push because of the sand, and the views strongly merit it. Any hybrid bike should be capable. 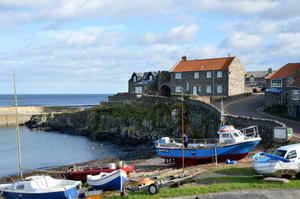 Craster (58mi) At Dunstan, stray from the route for an hour to visit Craster, the prettiest of Northumberland’s fishing villages. Yes, the tourists have discovered it, but no matter: it’s almost compulsory to have a kipper (smoked locally) in a bun, accompanied by a cup of tea, looking over the harbour to the fishermen’s cottages. Then, one mile up the coast on a grassy path is the wild ruin of Dunstanburgh Castle, an impossibly romantic sight. Cycling is forbidden on the path but usually tolerated. Don’t be tempted to cycle on past the golf course; the footpath is too rough for comfort.

Chathill (66mi) After this we bid farewell to the coast for a while, taking a winding, low-lying inland route. Note the tiny railway station at Chathill, rather incongruous on the fast East Coast Main Line. A branch line once ran from here to the coast at Seahouses: it closed in the 1950s, but we roughly follow its course on quiet lanes.

Seahouses (71mi) Seahouses is Northumberland’s seaside resort, its centre a cheerful mess of amusement arcades and fish & chip cafés. It’s calmer and rather more authentic down by the harbour, with top quality B&Bs on nearby North Street. The front bar at the Olde Ship Inn is a must visit. 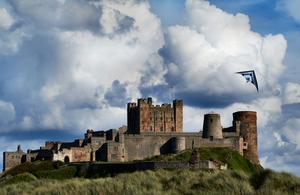 Bamburgh (74mi) With a busy B road hogging the coast, the cycle route takes a more circuitous inland path for the next 17 miles. But we return to the sea at Bamburgh, whose castle is a world away from the preserved dereliction of Dunstanburgh and Warkworth. Bamburgh’s walls are solid, its heating copious, its lawns mown; it is still, very much, an aristocratic seat. Don’t miss the surprisingly entertaining aviation museum.

Belford (81mi) More lanes take us over the busy A1 to the one hill of the entire road, the short, sharp climb into Belford. Once a coaching stop on the Great North Road, Belford looks like it has changed little since its bypass was built. It could well be the quietest town on earth, with its wooden toy shop, old-fashioned hardware store, and the timewarp of the Blue Bell Hotel. 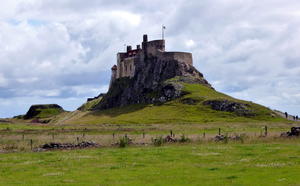 Lindisfarne (89mi) Beautiful quiet lanes run parallel to the busy trunk road until the turn for Holy Island and Lindisfarne. This is another of the must-do detours on Coast & Castles, but time it carefully. The causeway is only accessible at low tide – and there’s a headwind pretty much all the time.

This isolation grants the island a real sense of peace. The 7th century monastic foundation is dutifully explained in the English Heritage visitor centre, but do lock your bike up, go for a stroll out onto the headland, and cast your eyes out to the North Sea before turning back.

The last ten miles of Coast & Castles are arguably the finest of the entire route. The surface is erratic, the signage sporadic, and the facilities non-existent. Tiny coast roads give out into rough byways and grass footpaths along the cliffs. It’s a little rougher than the previous three days, a little wilder; it’s simply ten miles of coast. But that’s the beauty of it. Don’t be tempted to take the easy, flat road option; follow the coast and we guarantee you’ll enjoy it.

Berwick upon Tweed (101mi) Berwick is notionally in England, but its architecture has a decidedly Scottish feel. If you have time, the town’s pubs and restaurants merit an overnight stop. National Cycle Network routes lead up the coast, into the Borders, and south into wild Northumbria from here; there’s plenty of opportunity for further exploration. But the Coast & Castles route is reward enough in itself.