Chepstow NCN 42 follows a circuituous route around Lesser-Spotted Chepstow, but we’d recommend that you start by having a look at the wonderful castle, then pedal up the High Street and then fork right onto the oppressively steep Mounton Road. This takes you out to the bypass, where you cross straight over to join the country lanes that will form the route for the next 50 miles.

And yes, it is hilly, at least at first. Actually, the first five, maybe ten miles are the hardest of the route, as you’re climbing from sea level to 240m. Still, take it slowly, and you can stop at the Carpenters Arms at Shirenewton (halfway up) for a restorative pint. The eventual descent to the Usk Valley is reward enough. 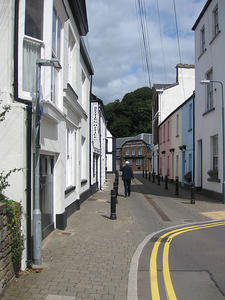 Usk (14mi) Usk is a small but bustling market town, with an eccentric, privately-owned castle, and a tidy town square where the Nag’s Head and Hoofs coffee shop offer refreshment and respite. No 49, on Bridge Street, is another café popular with cyclists. The route out of town largely follows the valley for five miles: look out for the grand Clytha Estate as you pass.

Abergavenny (26mi) From here it’s undulating lanes all the way to the edge of Abergavenny. The route to Hereford (NCN 46) turns north before reaching the town, but if you have the time, it’s worth the detour for Abergavenny’s independent shops, market hall and (again) fine castle. The town is making its name as both the bike and food capital of the Southern Marches, with an annual cycling festival, several local cycling clubs and long-established bike shops. Two other fine NCN routes head off here – one over the Gospel Pass to Hay-on-Wye, another along the magnificent Clydach Gorge to the heads of the Valleys and ultimately Swansea.

But we’re heading north to Hereford on a marvellously narrow country lane skirting the Skirrid – meet a tractor along here and you’ll have to reverse to the nearest farm gate before you can pass. 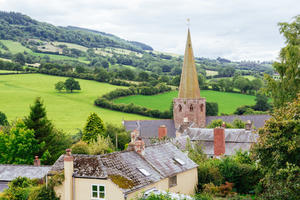 Grosmont (36mi) Grosmont has another castle and the friendly Angel Inn, rescued from closure by villagers and with numerous local beers and ciders. (Also, they kindly looked after my camera when I left it there, returning it with an added picture of a pub dog eating crisps.) Skenfrith, with its gastropub and castle, is a short detour down a lovely country lane (NCN 426).

Kilpeck (42mi) Back on the main route, do visit Kilpeck’s Norman church (there is, inevitably, a castle here too). Once you’re on the B road two miles further on, we’d suggest you ignore the NCN signposting along a dirt track unless you’re on a robust bike, but instead continue straight on and fork right at the bend to save the muddy detour. 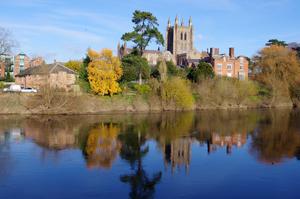 Hereford (51mi) A recently truncated country lane delivers you to the greenway beside the Hereford railway line. After a brief spell through a housing estate, this becomes the fine Great Western Way, a railway path through the city and over the River Wye. Hereford is a lovely place once you’ve broken through its concrete collar of a ring road. The cathedral is deservedly the prime attraction, but there’s much else – and do glance at the wonderfully old-fashioned frontage of the Mastercraft bike shop. The station is a short ride out of town along Commercial Road for your transport back to the start.