Whitehaven Many cycle routes begin with nothing more than a modest blue sign. The C2C has a towering metal sculpture on the seafront slipway, where it’s traditional to dip your back wheel in the water, and a market cross-like shelter where your group can get their kit together for the hills ahead.

No hills yet, though, as the first ten miles (give or take some backstreets in Whitehaven) are all high-quality tarmaced railway path, adorned with bike sculptures and idiosyncratic metal signs. Even when minor lanes take over, the gradients are fairly tame, with one or two sharp ascents but nothing too taxing. (Take care on the descents, though, as it’s easy to misjudge a corner especially with other cyclists about.) It’s a beautifully designed route; you’re cycling through the northern Lakes, but without the massive climbs you might expect. Tree-lined sections burst out into giant mountain views, and roadside farms have honesty boxes for homemade flapjacks. 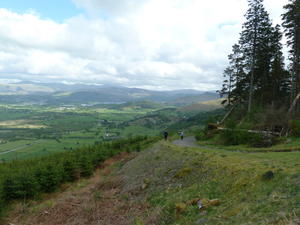 Whinlatter (25mi) This idyll is rudely shattered at Whinlatter. After High Lorton (mile 21), the hills loom up ahead of you, and there’s no way round. Three miles of climbing, on minor road, B road and forest track, take you over from the Cocker to Derwent valleys. Sharp descents and steep bends on the forestry road mark the summit, from where the route turns back on itself to the welcome (and very busy) Siskins Café.

The final descent from the café is gravelly, steep and very twisty. Don’t take chances. The reward is an easy, level five miles into Keswick with several tempting pubs along the way (the Middle Ruddings has excellent beer and cider).

Keswick (32mi) Keswick is the capital of the North Lakes, a thriving, outdoor-focused town which makes an excellent overnight stop for the four-dayer. There are no stratospheric climbs in the next 20 miles, but they’re hillier than a map might suggest. Despite the inescapable drone of the A66, they also offer some of the finest moments on the whole route.

The exit from Keswick is on a railway path, part of the old Cockermouth–Keswick–Penrith line – one of Beeching’s most unforgivable closures. The route then ducks onto a cyclepath alongside the A66, which is convenient if hardly interesting. Still, on Britain’s premier long-distance route, it jars to be told ‘Cyclists Dismount’ just for a truckers’ layby.

Note that the railway path is closed until 2020 for flood repair work; a diversion is signposted along nearby (fairly hilly) lanes. 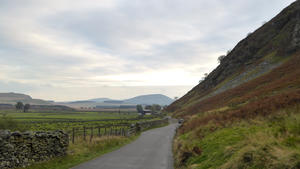 Mungrisdale (41mi) The dogleg to Mungrisdale may look unnecessary on the map, but it’s a terrific four miles of riding on tiny gated lanes. (Leave half an hour for a brief stop at the Mungrisdale pub.) At Greystoke, don’t miss the welcoming cyclists’ café on the edge of the village. The hill in Newton Reigny has a speed readout sign that triggers for bikes as well as cars; anything in double figures is more than respectable.

Penrith (55mi) The last two miles into Penrith are on a delightful traffic-free route through a college, under the railway and motorway, and then onto back streets. The official route avoids Penrith town centre. Much smaller and quieter than Keswick, it’s a worthwhile stop with an attractive market square and useful shops for provisions.

The C2C’s central section is where the really tough climbs fall (or rise). There’s a tough warmup out of Penrith itself, but believe us, it gets tougher. The lanes around the Eden Valley are enjoyable and not too hard, though there’s a sharp ascent out of Little Salkeld. 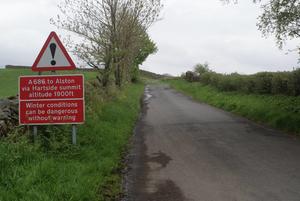 Hartside (71mi) Looming to your right is the great bulk of Hartside, the best-known climb on the C2C. At Renwick, the route swings sharply right, and a red warning sign marks the start of the long, four-mile haul to the top.

Despite its reputation, Hartside is not the hardest part of the C2C, and certainly not the steepest. It’s relentless, and all but the fittest will need to stop for regular breaks. But slow and steady wins the day.

The 1250ft of climbing means there are superb views at the hairpins; it’s generally well-surfaced; and the drivers respect cyclists, even on the A road section. The white cottage is the landmark that means you’re almost there. Unless you’re a really accomplished MTBer, don’t be tempted by the off-road alternative route, which is rough and boggy in equal measure; stick to the road. Sadly, the famous Hartside Top Café has closed after a fire, so bring your celebratory cake with you from Penrith.

The descent is long, fast and hairpin-free. Don’t miss the right-hand turn after three miles, after which the gradient sharpens considerably. There are good sightlines on this straight road so you can enjoy the downhill, but don’t forget to stop in Leadgate at the bottom! The three remaining miles to Garrigill are more taxing, a series of little valleys imposing an undulating character.

Garrigill (79mi) Sorry, Hartside. You may not quite be a pussycat, but you’re definitely domesticated. This next leg, by contrast, is where the C2C really shows its teeth.

Pretty little Garrigill, with its village green and olde-worlde pub, is the start of the most brutal climb on the whole route. Though just one-and-a-half miles long, it feels much longer; the desperately steep initial section becomes a relentless, grinding haul up to Flinty Fell.

Nenthead (82mi) The descent into Nenthead is short and exhilarating. Should your brake pads prove not up to scratch, there’s a bike shop in this old mining village, as well as pubs and a community-run shop. A shorter, but still, steep climb on the A689 takes you to the minor road on which the C2C reaches its highest point. The summit, Black Hill, is also where you enter Northumberland. Don’t miss the right turn on the ensuing descent, for one more, smaller climb before the strung-out valley village of Allenheads. 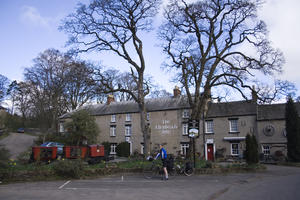 Allenheads (89mi) This is a popular overnight stop for C2Cers, with a good pub at the far end. Northumberland’s brief flirtation with the C2C has one more hill left. A deceptive cattle grid looks like it should be the summit, but the climb continues until the County Durham border and a roadside sculpture. There’s then a long, gentle descent to Rookhope: look out for the mine on the right. 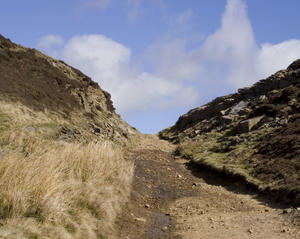 Rookhope (95mi) Rookhope is a bike-friendly village with camping, pub, and even a church with a sign saying “Bless all cyclists on the C2C”. It’s here that the off-road grouse moor route starts. In good weather, this is worth considering if you have a cross bike or MTB, but do expect to push for parts of it.

Alternatively, cycle uphill past the church onto a lovely valley-side minor road. This gives excellent views, though at the cost of a tough climb up to the summit. Descend again into Stanhope, an attractive, down-to-earth town; accommodation is available, though evening meal options are limited. The catch is that you then have to cycle up the near-vertical Crawleyside Bank, so steep that descending traffic is provided with a sandy escape lane. The ascent becomes more manageable after the village and the cattle grid onto the moor.

To the North Sea

Crawleyside (100mi) It’s all downhill from here. The climb out of Stanhope is the last one of any size on the C2C, taking you to 400m above sea level – and it’ll take 37 miles of descending before you finally reach the coast.

For those who have struggled up Crawleyside Bank, the café in the old station building will be a very welcome sight. It’s the start of a gorgeous, isolated railway path across the moors, stark and beautiful even in wet weather. The surface starts gravelly and a little puddly, but gains a new, smoother surface as the comfortable descent begins. Consider stopping at either the station café or the tea-room further along the railway, as there are fewer tempting refreshment opportunities in the urban reaches of the route which follow.

Consett (109mi) Just before Consett, the route meets a crossroads. Turn left for the alternative C2C finish via Newcastle, or right for Durham. (Newcastle-bound cyclists will actually be better off continuing for another half-mile to a better-surfaced link route.)

The main C2C goes straight on towards Sunderland. On balance this is the more scenic and enjoyable route, though the roundabouts and roadside paths of Consett might briefly convince you otherwise. Eventually, after Stanley, the route emerges into picturesque countryside once again, hugging the side of the hill to give good views to the north.

Washington (126mi) The railway path continues all the way through Washington, easy cycling all the way. Eventually the C2C drops down to the banks of the River Wear, with a small climb to awaken your legs – but nothing compared to the previous days’ exertions. 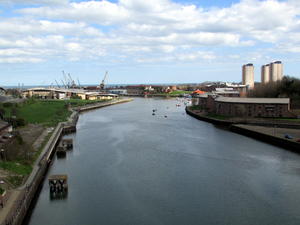 Sunderland (131mi) There are on-off views of the Wear as you approach Sunderland; more traffic noise, too, as the Nissan plant looms on the left. The riverside Shipwrights Inn welcomes cyclists. When the path divides, be sure to take the rightmost fork along the riverside, rather than the northern braid past the Stadium of Light. The river route is unmissable: glorious views across the water, fascinating traces of industry, and Wearmouth Bridge looming ahead of you.

Passing under the bridge, ‘Keep Going’ installations encourage you on to the finish. There are views of former shipbuilding yards, in an area now being regenerated through projects such as the National Glass Centre. This is a popular path, so watch out for dogs and pole-toting anglers.

Roker Beach (135mi) Eventually, after the marina, you’ll have your first glimpse of the North Sea. The route turns north for a very short way to Roker beach, where a striking sun-inspired statue marks the end of the C2C. Haul your bike over the beach and dip your front wheel in the sea; then treat yourself to coffee, cake or chips at the cheerful refreshment kiosk. Congratulations. What will your next challenge be?