Walney The Bay Cycle Way begins among the low-lying dunes of the Isle of Walney, sand blowing across the roads, a sea breeze helping you on your way.

Buffering Barrow from the Irish Sea, this flat, nature-rich island is the start for our route and the gruelling Walney 2 Wear coast-to-coast. But while W2W cyclists head off into the Lakes and the northern Dales, we’ll be hugging the coastline for 80 miles, with just the occasional climb to take in the views.

Barrow-in-Furness (2mi) In Barrow-in-Furness, those views are characterful rather than classically pretty, with newly surfaced paths guiding the cyclist around docks and power stations. But the coast is ever present, the first inland excursion not coming until mile 8. At Rampside, look out for the causeway to the south, once the departure point for a ferry link to Fleetwood in Lancashire. The half-mile diversion is worth making to enjoy a coffee and cake in the Bosuns Locker café – the first of many deserved stops en route.

Look out, too, for the needle-like lighthouse as you follow the coast road along. This is officially an A road, but fortunately, most traffic takes the busy A590 inland.

Roosebeck (8mi) After passing Morecambe Bay Oysters’ ‘on-growing’ site, the route leaves the coast at Roosebeck to begin a 100m climb, one of only three on the whole 80-mile route to reach that giddy height. Should you need a breather halfway, another half-mile detour will take you to Great Urswick and its two excellent pubs. 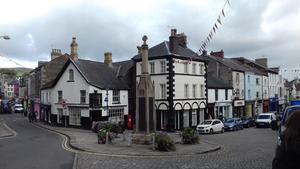 Ulverston (19mi) Enjoy the descent back to the coast at the pretty village of Bardsea, on the way to the friendly market town of Ulverston. It positions itself as a ‘Festival Town’ with music, comedy, arts and historical events, but it’s best known as the birthplace of Stan Laurel, whose trademark grin beams out from the statue outside the Coronation Hall. Cycle along the old ship canal to the coast and the Bay Horse, where the large portions are legendary and the bay views superb – the ideal first night for a four-day tour.

Greenodd (22mi) The undulating minor road from Ulverston to Greenodd forsakes bay views for a gentle taste of the Lakes, one of those forgotten back lanes that the NCN does so well. The coast has narrowed into the Leven estuary, which the Bay Cycle Way crosses on a neat little footbridge before taking to a traffic-free section carved out of an old railway and farm tracks. 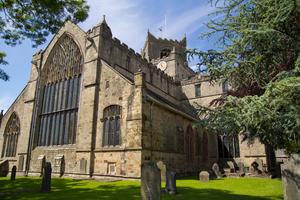 Cartmel (30mi) Here comes the last climb of any significance, a gorgeous wooded lane rising to the vertigo-inducing (ahem) 170m, or 550ft. Not exactly the Alps, we’ll grant you, but worth it for the gradual descent into the delightful village of Cartmel. Clustered around a classical village square, Cartmel has plenty going for it – a 12th century priory church, a well-kept racecourse – but it’s the gloriously self-indulgent foodie angle that most tempts the hungry cyclist. Here you can enjoy handmade chocolates, artisan cakes, local cheese, and the village’s trademark sticky toffee pudding, all washed down with the microbrewery’s finest. Energy bars will never seem the same again.

Heading back towards the coast, seafood is the order of the day at the fishing villages of Cark and Flookburgh. Shrimp are caught every day on the sands, boiled, potted and sealed with butter – a lovely snack. The garden centre café between the villages is a deserved favourite with local cyclists.

Grange over Sands (37mi) A tiny, level lane leads past caravan sites towards Grange-over-Sands. This sleepy Edwardian seaside resort has an gentle charm and some lovely architecture, particularly the railway station and the (bright red!) Miners’ Convalescent Home. Brass band concerts and ornamental gardens give it a decidedly old-fashioned atmosphere.

A single-lane road heads out of town, dodging the slab-sided Meathop Fell before emerging onto the near-abandoned old A590, superceded by a roaring dual carriageway. We join the much quieter A6 for a short while after little Levens and its Elizabethan hall, before turning off towards the Kent estuary. 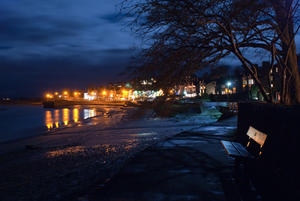 Arnside (53mi) The coast road through Sandside is a delight, so close to the water that it can become inundated at high tides. In an all-round memorable route, this might be the most memorable stretch of all.

Look coastward from Arnside’s seafront cafés, and you’ll see the striking, low-lying railway viaduct cutting out a dog-leg that took us 14 miles of cycling. There’s a long-term aspiration for a cycleway along the viaduct. For now the short-cut is only open to trains, but once again, there are superb views from the road which runs directly along the water’s edge.

The Bay Cycle Way threads around the edge of Arnside Knott, with campsites and caravans dotted across the fields. Silverdale has pubs, cafés and a useful Co-op. The route joins the Lancashire Cycleway here, following it for a while before detouring via a slow ascent to Warton. You may be bemused to see a pub called the George Washington: his ancestors came from the pretty village.

Carnforth (62mi) The route dodges Carnforth, preferring instead to follow the tiny Shore Road across low-lying land before landing on the Lancaster Canal towpath. This canal is Britain’s longest without any locks, and runs from Preston to the edge of the Lake District – it once went all the way to Kendal, but construction of the M6 put paid to that in a less enlightened age. We follow it for just three miles to Hest Bank. If you need sustenance along the way, check out the renowned Packet Bridge fish-and-chip shop in Bolton-le-Sands, founded in 1925. 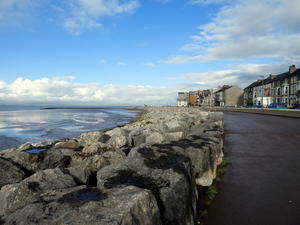 Morecambe (70mi) The approach to Morecambe hugs the seafront for three flat miles, using the broad promenade that runs beside Marine Drive. Look out for the Venus and Cupid sculpture dedicated to those who have lost their lives on the sea.

Morecambe itself is a rewarding place to explore, far from an affluent resort but with plenty of civic pride, from the restored art deco Midland Hotel to the lively market. It’s the second place en route to celebrate a hometown comedian (Eric Morecambe, of course, born John Eric Bartholomew), and also the second departure point for a coast-to-coast cycle challenge – this time the Way of the Roses.

Lancaster (73mi) We share its route into Lancaster, along an excellent four-mile railway path that provides a speedy alternative to the busy roads. But no sooner are we in the heart of the city, courtesy of the elegant cycle bridge over the River Lune, then we leave again. Another railway path leads us along the riverbank, passing the regenerated St George’s Quay. 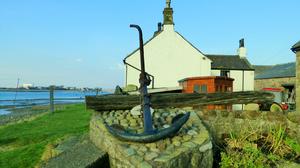 Glasson Dock (79mi) Moody views of the Lune estuary’s salt marshes accompany these last six miles of flat, well-surfaced riding. The little port of Glasson Dock, the Lancaster Canal’s outlet to the sea, is no longer a busy trading centre, but a relaxing waterside village that makes a fitting place to toast your 80-mile Bay Cycle Way journey. And there’s nowhere better to do it than the Lantern o’er Lune café, a long-term cyclists’ favourite where the unassuming menu belies the quality of the food.

There’s no railway station at Glasson Dock – you’ve just cycled along what used to be the railway! So if you’re heading back by train, retrace your steps to Lancaster, and take a while to explore this historic town. Maybe next time you’ll return for the Way of the Roses…