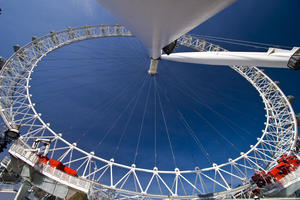 London Eye There could be no more iconic start point than the London Eye, the capital’s own Big Wheel by the River Thames. The riverside path is too busy for efficient cycling, so the route begins around the back of the Eye by a discreet blue AV (Avenue Verte) sign.

The passage through London is a lot of Avenue but not much Verte. It’s enjoyable enough but far from compelling, and with heavy traffic in places, can be taxing for inexperienced cyclists. If you don’t need to tick off every mile, consider getting a train from London Bridge station to Coulsdon South, on the outskirts of London, and picking up the route there – just in time for the most enjoyable, scenic sections.

Clapham Common (4mi) But if you do ride it, your first half-hour will follow a succession of city streets towards Clapham and Wandsworth. A few have painted bike lanes or traffic calming, but there is, sadly, no escape from the London traffic. Queenstown Road, after the Chelsea Bridge, is a notorious free-for-all. Keep your wits about you, watch for buses, black cabs and (particularly) construction trucks, and when you can, enjoy the sights such as Tate Britain and Lambeth Palace. 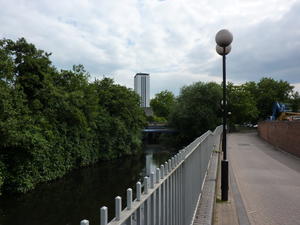 Wandle Trail (7mi) In time the route drops onto quieter back streets and across city parks, on its way to the Wandle Trail. This narrow riverside trail is much like an urban canal towpath, with the requisite quota of dog-walkers, but no boats. It’s a little intermittent, lapsing onto residential streets for short bursts, but the main annoyance is the all-too-regular gates across the path; the endless dismounting quickly becomes exasperating.

Carshalton (14mi) A straight, busy residential road through Carshalton eventually leads to a pleasant private drive and the hilly tracks through the Surrey Oaks country park. Lavender fields signal the retreat from London, but take great care at the confusing junction where you rejoin the roads.

Surrey and the Downs

Coulsdon (19mi) Coulsdon is London’s last gasp and a merciful conclusion to this interesting, but often frustrating section. As you cycle slowly up the long-looming hill, be reassured: better times are just ahead.

Coulsdon South station is just off the route, and is a practical rejoining point for those who have opted out of the busy London streets. But London hasn’t breathed its last yet: the glorious road over Farthing Downs, curiously, is owned by the Corporation of London. The climb isn’t easy, but it’s worth it for the views back over the London skyline. This is the first of many memorable moments on the way to Paris.

An exhilarating, weaving descent takes you over the M25 (wave at the queuing traffic) and to the junction with NCN route 21. This weaves towards Redhill on delightful, if narrow, bridleways. It’s enjoyable on a hybrid, particularly going downhill, though road bikers will want to find an alternative.

Redhill (27mi) Redhill, Gatwick, Horley and Crawley form an extended urban passage. Not without its highlights, particularly the byway past Salfords with its bike-sensitive traffic lights, it can sorely test the cyclist’s patience as one Crawley business park becomes another. The route through the bowels of Gatwick Airport is a striking curio, but the effect is rather spoilt when you’re delivered into a lorry park immediately afterwards.

The official Avenue Verte follows NCN 20 through Crawley, with a short connecting path to the Worth Way which will lead you into the countryside. For a slightly more direct alternative, follow NCN 21 signs to Three Bridges station, which becomes the Worth Way soon after.

If all this sounds too uninspiring, we’ve concocted an alternative route which avoids the urban sprawl of Gatwick and Crawley. There’s no signage, so you’ll need to print out a PDF or put the route on your GPS, but it’s a pleasant option for those who would rather be out in the open countryside.

Crawley (38mi) At last; the Avenue Verte truly lives up to its name. The route from Crawley to the coast at Newhaven is a rural idyll, following old railway tracks past little villages and unspoilt market towns. There’s a little climbing on the quiet lanes that link the rail trails, but for the most part, this is a relaxing, easy ride.

East Grinstead (45mi) The pretty town of East Grinstead joins the Worth Way and Forest Way, the first two railway paths. The surface is mostly gravel but firm throughout; there’s often a smoother, worn rut at the side of the path which will give road-bike riders more comfort. There are few facilities en route, but short diversions will take you to Royal Tunbridge Wells and the villages of Forest Row (good pubs and restaurants) and Groombridge.

Groombridge (55mi) A burst of hilly lanes begins at Groombridge. This undulating, wooded countryside is particularly enjoyable for the more experienced cyclist who will get a first chance to stretch their legs. For sustenance, there are pubs at the villages along the way, and useful railway stations at Eridge and Crowborough – though note that the trains don’t go all the way to the coast.

The short bridleway after Eridge station saves an awkward crossing of the A26 but is narrow, steep and rough; take an on-road diversion if your tyres aren’t up to it. The bridleway begins via a driveway that is marked ‘PRIVATE’; ignore this, and trust the fingerpost to point you the right way.

Heathfield (67mi) Heathfield, too, is approached via a bridleway passage, beginning with an unimproved grassy field. This is fun for those with a taste for off-roading, but others will prefer to continue along the minor road, then turn right at the A267. Though the route proper bypasses Heathfield town centre on steeply falling back streets, the town is worth a visit if you have time to spare. 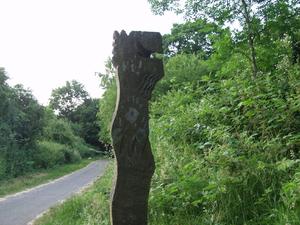 Cuckoo Trail (69mi) The Cuckoo Trail from Heathfield to Polegate is the finest hour of the Avenue Verte in England. This flat, wooded, tarmaced railway path is easy riding throughout. Endearingly, many signs are in both English and French, enticing you to visit the ‘Cidrerie de Merrydown’ (though we’d suggest you save your euros for the infinitely preferable Norman cider). Hailsham passes unremarked as the railway speeds you on its way. Don’t miss the interactive lineside display where you can work the old semaphore signal yourself!

Polegate (79mi) Turn right at Polegate, just before the road bridge, onto NCN 2. A rough mile-long bridleway gives out to tarmac and a series of fairly busy lanes: there is an optional roadside cycle path after the Berwick station crossroads. 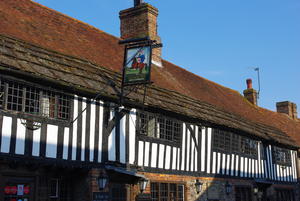 Alfriston (86mi) The route turns left immediately before Alfriston, but this olde-worlde village is worth a visit for its pubs and tasteful tourist shops. (Unfortunately the youth hostel, once a good stop-off before catching the ferry the next morning, has now closed.) The lane down the valley of the Cuckmere River is an understated delight; rural Sussex without hills, traffic or mud. Look out for the white horse high on the opposite bank. 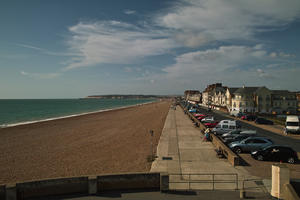 Seaford (90mi) Crossing the river necessitates a mile-long slog on the busy A259, but before long, residential streets deliver you to the Seaford seafront. The route from here to Newhaven is excellent, starting on the esplanade and ending with an above average roadside cycle path. 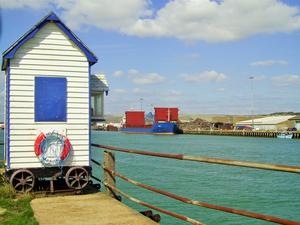 Newhaven (97mi) It’s a shame Newhaven Ferryport is quite so uninspiring, simply a queue in a car park with nowhere for the tired cyclist to shelter. There is, however, a handy Sainsburys just before. If you have time to kill, consider cycling on the other side of the Ouse to the Hope Inn and Newhaven Fort.