I got off to a rubbish start. After 7km I passed a dustbin and went to grab my rubbish bag from underneath the rackpack and it wasn't there. It had been a rough ride and I always carefully check before leaving camp that I haven't left anything, or rubbish, behind. I really couldn't face going back all that way. In particular the final 2km had been a reall teeth rattler. Sorry.

A gang of german cycle tourists turned up. They were on an organised ten day ride fully supported and escorted between hotels. Lovely bunch of people. Even lovelier when they shared their breakfast schnapps.

I readjusted the tension on my crank. It had started ticking a couple of days ago and it was worse. Driving me nuts. I thought that it had to be my new pedals but when I finally decided to investigate the crank was clearly loose. Win!

I found the countries most expensive lunch menu. However the pulled pork sandwich at ten euros (cheapest thing on menu, no extras) was very nice.

I got a water refill from an open but not yet complete 'nature' hotel in the middle of nowhere. Looked very posh.

I am in a national park (I think) in a remote valley accessed via a really rough road. 5km in the morning to the nearest beach resort and breakfast.

I woke late at 8:15 with a bright sun cooking the tent. I eased onto the road acouple of hours later.

I had an early lunch at 12:15. I didn't understand much about the spoken food options so I picked the most unintelligible. I think it was a goulash tthough I am no goulash expert. Very nice though a bit expensive.

At 6pm I had to push for 1km through soft sand. I wish that I had instead either just turned back and headed for the road or just stopped there for the night. I had planned for an early finish but decided to push on. Grrh.

I didn't find an idyllic spot adjacent to a beach but it is not too bad.

Yesterday I enjoyed a restday in Lisbon and tried to avoid walking around too much. It has some very interesting old buildings.

I enjoyed dinner just nearby the hostel that was filled with locals. I had double fish - sardines followed by tuna. I pricked up my ears when fellow dinners started discussing Tony Blair!

This morning I crossed by ferry and eventually got the countryside and another ferry to this Tróia peninsula. 20km of wildcamping heaven! 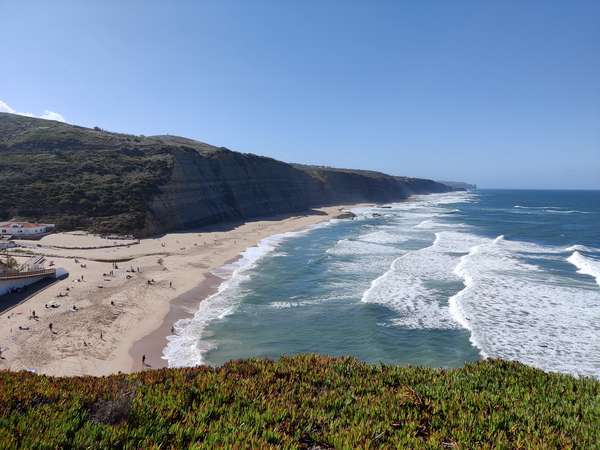 I find it painul to recall today's ride. There were highlights but there was also a lot of stress. Climbing tough tracks - aka 'pushing', missed turns,pedestrian dodging, heavy traffic.

Yeah, too much to go over again. I have checked into a hostel n Lisbon and I am here for two nights. I woke this morning to an almost flat airbed so I purchased a replacement from Decathlon. It is a lot thinner but only needs ten puffs of air to inflate.

I passed a pond while pondering how to identify the location of the leak in my airbed. I thought - 'what the hell, not too many options'. Whilst trying to avoid falling in (brings back memories of an early dunking as a small child - I remember looking up from below the water and seeing everyone) I submerged every part section by section but to no avail. However, it did deflate a lot - perhaps due to the cold water causing the air inside to become denser? I will try the airbed again tonight. If still a problem then I will get a new one. A trouble free night's sleeps is important when you are riding for six hours a day. Still 90km from Lisbon. Grrh. I have commited to getting there tomorrow as I am splitting accomodation costs with the French guys. Hot and hilly today. I am staying in an old abandoned house - inside the main room. Looks to have been abandoned five to ten years ago.
Add a comment
Page 1 2 3 ... 9