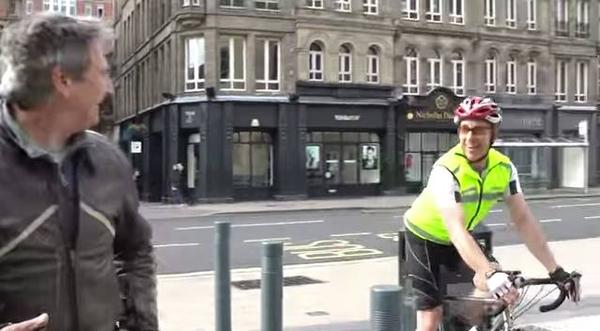 The Motorcycle Industry Association almost ended up with egg on its face after organising ‘City Commuter Challenge’ events in Leeds and Brighton.

The events were intended to prove that motorbikes are the quickest way around town – but the powered two-wheelers were nearly upstaged by their unpowered relatives.

In Brighton, the motorcyclist scored a time of 29 minutes for a 14-mile commute during rush hour. The cyclist came in very soon afterwards at 34 minutes, while the car driver was way back on 59 minutes. The Leeds event, too, saw the cyclist come in closely behind the biker.

Tracy Harris, the Brighton cyclist, told the local Argus that he was pleased to run the motorcyclist so close:

“It was great fun. I knew I wouldn’t beat the motorcyclist but I was really pleased to finish within five minutes of him. When my boss and my co-workers finish work at the same time, we often have an unofficial race back to Rottingdean, me cycling and them in their cars. If it’s rush hour they don’t stand a chance.”

Mark Sadler, a council employee, was the cyclist on the Bradford–Leeds run – and came in just four minutes behind the biker. He predicted that the route will become much more pleasant “once the infrastructure’s in”, referring to a new 14-mile cycle superhighway which is being built between the cities.

The Motorcycle Industry Association sought to explain the close-run results by saying “the [bicycle] riders were both sportsmen who each cover over 10,000 miles a year on their bikes… the real success was the motorcycle”. Mr Harris works for Brighton & Hove City Council, but is also a well-known triathlete.